The Armorer's Workshop is a multi-layered PDF in a fantasy/medieval theme. Lots of texture options on this one, including optional snow layers. It measures 4" by 5.5" and stands about 6" tall including the chimney. It sits on a 6" x 9" ground piece, and includes a "cordwood" prop. 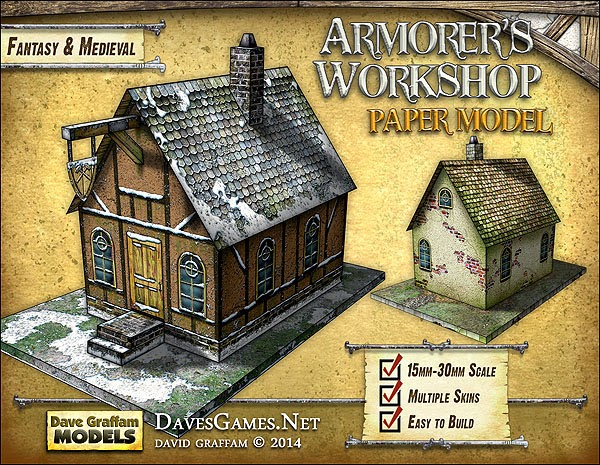 Another look at the Armorer's Workshop -- this time it's a view of the south-east corner without snow. 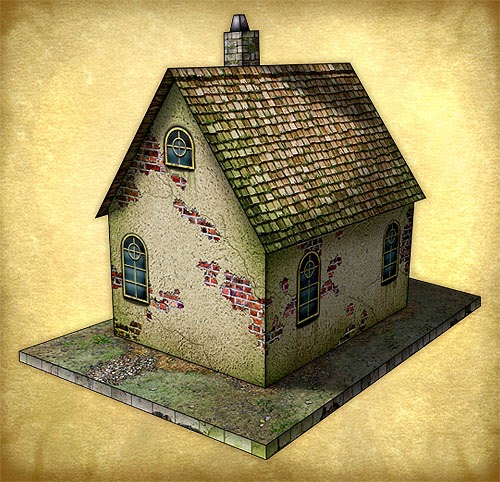 Posted by DagobahDave at 4:02 PM No comments:

Armorer's Workshop on its way

Coming tomorrow! Here's a look at the Armorer's Workshop multi-layered PDF kit. Here it is showing the optional snow layers. 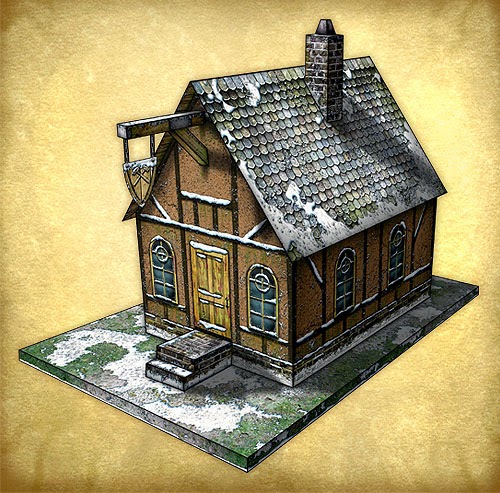 Posted by DagobahDave at 9:31 AM No comments:

The part of my brain that I call Evil Corporate Dave has decided that Thursdays are the best days to release new models, since that's the time that gamers (and game masters) are heading into the weekend and thinking about all the fun they're going to have. Releasing a new model on Thursday puts it on the "new releases" lists at your favorite webstores over the weekend, which is when those sites get the most traffic. Releasing stuff earlier in the week tends to go largely unnoticed by the passive shopping crowd, so Thursdays.

On Thursday the 6th of March 2014, look for the Steampunk Building No. 1 multi-layered PDF steampunk model kit, just $4.95.
Posted by DagobahDave at 9:17 PM No comments: 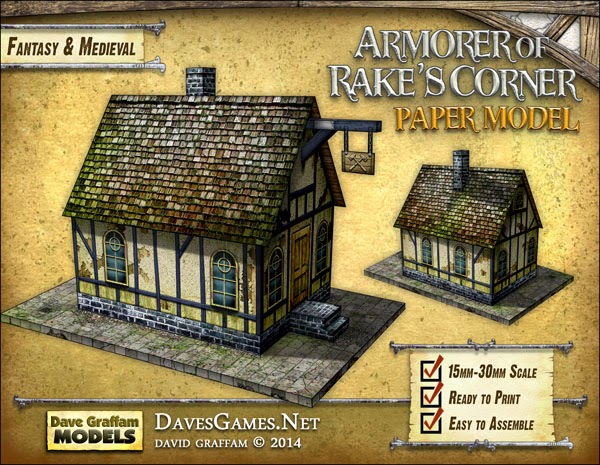 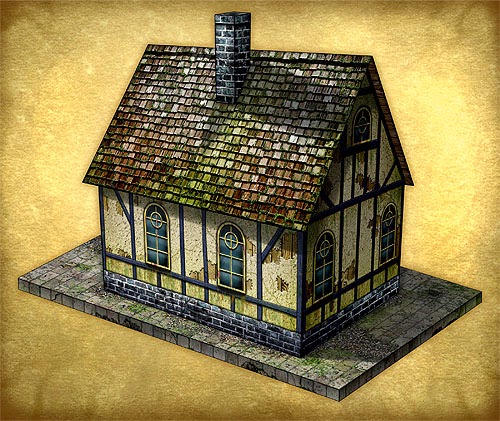 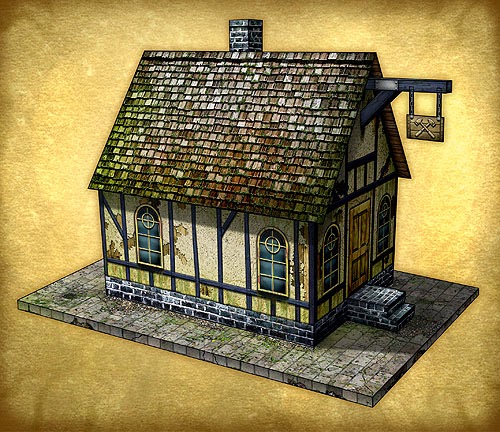 Posted by DagobahDave at 3:26 PM 2 comments:

Steampunk layers in progress. This snapshot is a few hours old, so the latest version is a little better than this. 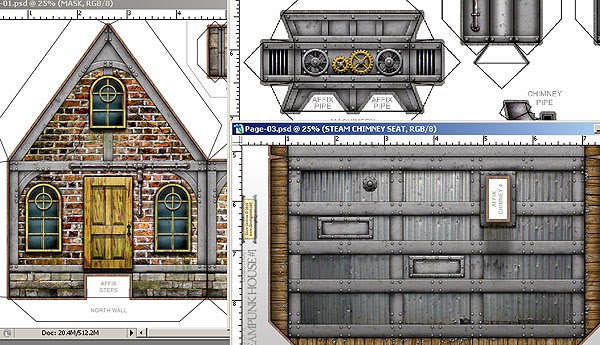 Here's how steampunk layers start. The colorful elements are "masks" that will be used for metallic textures.

Posted by DagobahDave at 1:52 PM No comments: 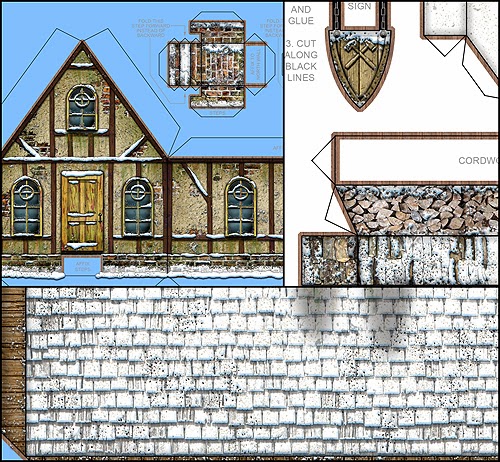 Posted by DagobahDave at 1:07 PM No comments:

Half-timbers are in place, and I'll be working on the stucco next. That'll just about wrap up the medieval wall textures. 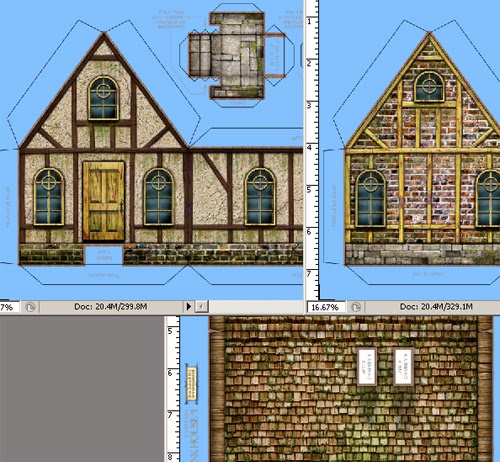 Posted by DagobahDave at 12:00 AM No comments:

This afternoon I worked on the fantasy/medieval roofs (2 colors of wood shingles, and moss which takes *forever*, not shown) plus these new windows (shown here). This all looks a little flat to me, but things will stand out more when I get to final shading. I'll probably create a new door design next, and then I'll move on to the half-timbered stuff. 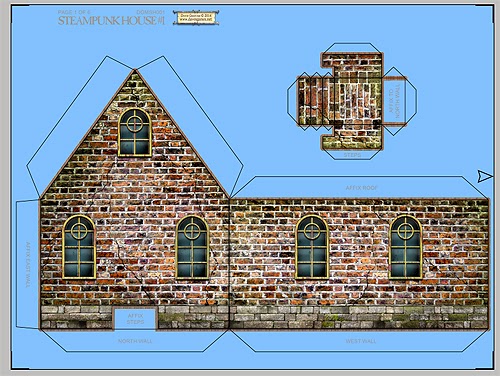 Posted by DagobahDave at 6:58 PM No comments:

Stone textures are done for the Steampunk House #1. A few other textures are in place but not finalized. I have a cool idea for metal half-timbering, but I'm going to finish the fantasy/medieval texture options fire before moving onto the steampunk stuff.﻿ 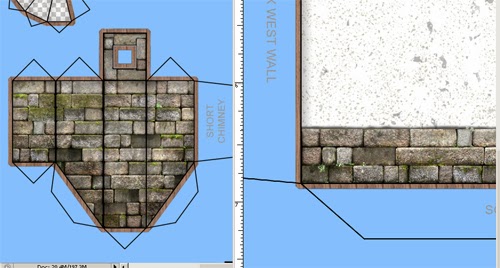 Texturing in progress on the Steampunk House #1, which is what I've decided to call this kit. I figure the name will stand out and let folks know that this is the start of a new line. 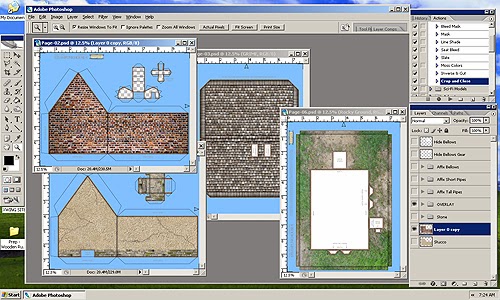 Posted by DagobahDave at 8:08 AM 3 comments:

Alrighty, here are some views of my new model kit. These images are "3D mockups" based on actual photos of the white paper test model, although they might look like 3D models. (This paper model has never seen the inside of a 3D modeling program. I did it all in 2D in Photoshop, including these images.)You can probably see how this will make a perfectly serviceable fantasy/medieval model by leaving off some of the gribblies. The "T"-looking objects will be pipes/conduits leading up from the ground into some machinery (fans, piping, gears, whatnot). There's a stack of cordwood, and an automatic bellows, and two chimneys because steampunk. I'm guessing this is some sort of workshop.Anybody want to name this thing? I'm okay with "Steampunk Workshop No. 1" but maybe there's something better.If this design doesn't seem steampunk enough, that's all right. I'm easing into this sort of thing. 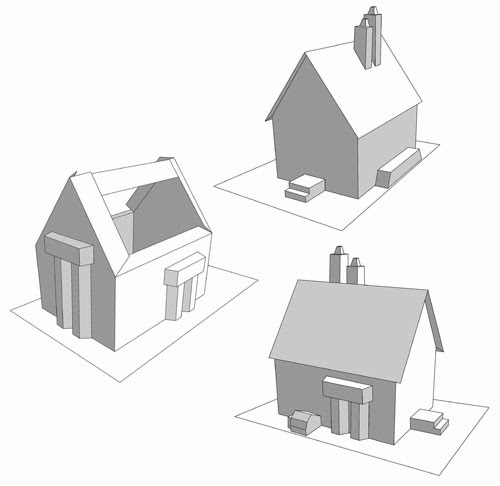